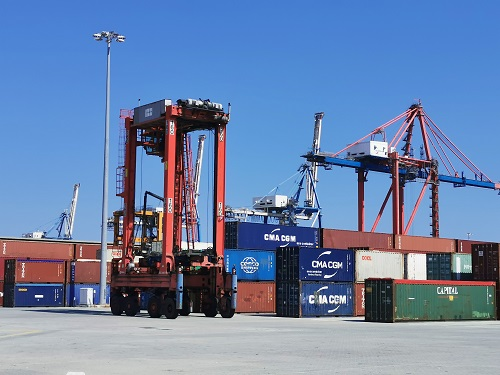 Eurogate's big goal is to make Limassol a center of transit trade and after four years of efforts there was an agreement with the state in this direction, according to its Operations Manager , George Pouros. The agreement was approved by the Central Committee on Changes and Claims and sent for legislative control to the Law office of the Republic. Both Eurogate and its customers declare themselves ready to start the transit trade, "yesterday" and that's why letters have been presented from major ferry lines such as MAERSK one of the largest in the world", stressed Captain Pouros.
He added that for the full development of the transit trade, an investment of up to €34 million will be needed, which Eurogate will invest, by decision of its shareholders. He stressed that the benefit of the transit trade will be to many recipients who will be involved in the process and that the state which will have direct and indirect revenues of many millions. Referring to Eurogate's course so far, Captain Pouros noted that the company ensured quality service to ships, recipients and exporters, immediate information on the arrival of containers and reduction of time up to 24 hours.
"Many times by the time a ship unloads, half of the containers have already left inland," he noted. The terminal works with a 24-hour shift, 7 days a week and in this way the ships save 10 to 15 hours per arrival at the port and charge a lower fare. Eurogate has invested €35 million in the port and now has a large number of straddle carriers and two ultramodern gantries, which unload the containers in two, resulting in 22 loading and unloading containers per hour, having reached 35 to 40.
Due to the pandemic and war, there has been a decrease in turnover, but the company is expecting a recovery.  "The reduction from the pandemic reached 22%, stabilized at 10% and began recovery at the end of 2021, which was overturned due to the [Russo-Ukrainian] war," said Captain Pouros, who believes that this will be corrected.