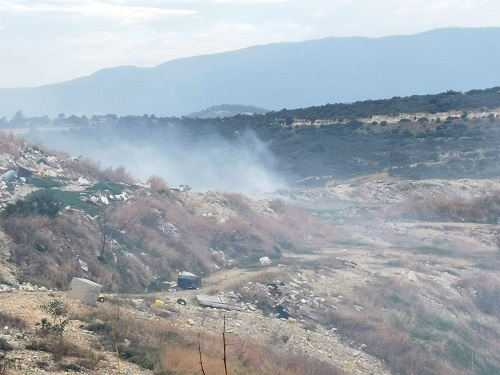 The planning of the Water Development Department for the restoration of the uncontrolled waste disposal site "Vati" of the Limassol district foresees a call for tenders for the project in September or October 2022 and the start of works 6 months later, according to the relevant Department.  An environmental approval has been issued for the project in January 2020.  During the preparation stage of the environmental impact study, a public presentation was held in September 2018, during which the informed views of the municipalities and communities concerned were requested.
The aim of the project is the restoration and protection of the natural environment, the protection of underground aquifers, the reuse of space, as well as the production of electricity from biogas. Based on the design, it is proposed that "Vati" accepts waste and contaminated soil from another 27 landfills in the Limassol district, out of the 44 that will be restored. The restoration and aftercare work will include the collection and accumulation of all waste in a uniform mass, as well as the placement of successive synthetic geomembranes for the management of biogas, as well as coating the waste mass with soil.
The collected leachate will flow to the lower points, from where, through a pipeline, they will be taken to a tank and with the use of a tanker car for management, to an approved unit. It is proposed to construct an active system for the pumping and treatment of biogas, which will either be driven for combustion in a torch or will be used for energy utilization in an electric generator.  Preliminaryly, it has been estimated that the produced biogas will be able to supply a power plant equal to 1.8 MW.
The area will be planted with plants of the Cypriot flora with small water needs, while firebreaks will be created.  The implementation of the project has been delayed and must proceed as soon as possible, since it is included in what Cyprus is obliged to carry out, in accordance with its commitments and the directives of the European Union.