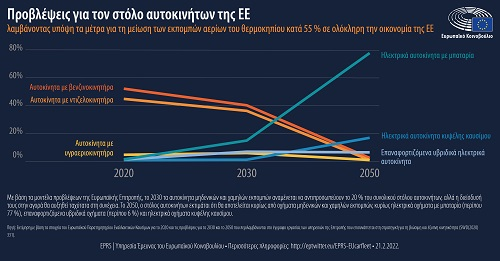 By Thea Pieridou
Press Officer of the European Parliament Office in Cyprus
In November 2019, the European Parliament (EP) declared Europe and the world at a climate emergency. The seriousness of the situation is also demonstrated by the term 'climate crisis' which is now used in the EP and in the EU in general. In response, the European Commission presented the European Green Deal in December 2019 – a roadmap for moving towards a climate-neutral Europe by 2050. The European Green Deal will contribute to the well-being of citizens. We must make Europe climate neutral and protect our natural home - this will be beneficial to people, the planet and the economy. The EU has taken several initiatives to achieve climate neutrality by 2050, a target that, together with the intermediate target of reducing emissions by at least 55% by 2030, is included in the European Climate Law.
If Europe wants to achieve zero carbon emissions by 2050, radical change will be required in many areas. The way we move is one of them. The transport sector is the only sector in which greenhouse gas emissions have remained higher since 1990, having increased by more than 25%. Transport is responsible for one fifth of total emissions in the EU. Road transport accounts for the largest proportion of transport emissions and in 2021 was responsible for 72% of all greenhouse gas emissions in the EU's domestic and international transport. Therefore, the introduction of stricter emission standards from cars should contribute to the achievement of the EU's climate objectives. And it is precisely for this reason that MEPs are proposing to introduce stricter limits on CO2 emissions from cars and vans with the ultimate aim of zeroing emissions from new vehicles by 2035.
In particular, the EP's Environment Committee supported the European Commission's target of zero emissions by 2035 in a report adopted on 11 May 2022. MEPs also want the Commission to develop a methodology to assess the full life cycle of CO2 emissions from cars and trucks, including fuels and the energy consumed, by 2023.
The environment committee's report is expected to be approved during the EP plenary in June 2022 in Strasbourg, which will allow MEPs to start negotiations with all EU governments.