Limassol first environment-friendly neighbourhood about to be launched 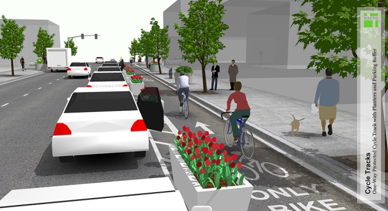 Limassol’s first environment-friendly neighbourhood will be set up in the Zakaki-Omonia area of the city. The neighborhood consists essentially of two parts, the area surrounding the 8th Primary School and the area along Sarandaporos Street. Only one bid was submitted to Limassol Municipality and the relevant contract is expected to be awarded during the current month, though it slightly exceeds the projected cost of the project. (A total of 15 companies had received the bidding documents, but only one finally submitted a complete bid). Construction is expected to begin in December and will be completed within the first half of 2020.
In the meantime, a call for the second environment-friendly neighborhood, in the ​​Agios Spyridonas area, is expected shortly. Projects of this kind provide for the redesign of selected roads, which are linked to green areas and schools, and will include inter alia bike lanes, additional green areas and organized parking places, while the use of private cars is discouraged. These neighborhoods will be indentified by special signs and traffic control measures to make them more humane, safer and more attractive.
The effort is to create a pleasant environment where residents can move safely either on foot or using other means of transport, such as the bicycle. They are neighborhoods that will include continuous tree-lined streets, organized bike lanes, and large unobstructed sidewalks, facilitating gatherings and socialization of residents. The intention is to have optimal traffic management to reduce problems caused by the use of the car, while the speed limit is reduced to "safe" levels of 30km / h. The budget for each neighborhood is €1 million, a fund coming from the Municipality budget.

HISTORY: The first soap factory in Cyprus, that is mainly known as 'Theodosiou warehouses'

The special charms of a small village in Limassol, which used to be a central one in the past