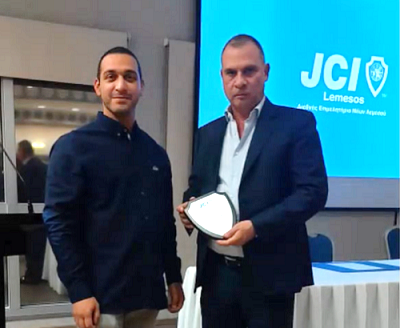 The steadfast, and perennial, support of the Limassol Chamber of Commerce and Industry (LCCI) to the JCI (Junior Chamber International) Limassol was expressed by LCCI President Andreas Tsouloftas, in an address to the JCI Annual General Meeting.
Noting the excellent cooperation that has always existed between the two organizations, Mr. Tsouloftas characteristically stated that the Jumior Chamber is essentially a first stage towards the integration of young entrepreneurs in the large Chamber community of Limassol which is the LCC, but also of Cyprus, which is the Cyprus Chamber of Commerce and Industry.
Both the outgoing, and the newly elected, President of JCI Limassol, Minos Agathokleous and Anthimos Demosthenous respectively, praised the continuous support, as well as the guidance of the LCCI in all Junior Chamber efforts and stateed their readiness to take over any task the LCCI Board might wish to assign them.
In the context of the Assembly, former president of JCI Limassol Marios Pafitis awarded an honorary distinction to the LCCI ex-president Costas Galatariotis, in appreciation for his whole-hearted support to the Junior Chamber throughout Mr. Galatariotis his six-year presidency of the Limassol Chamber of Commerce & Industry.

Sea exploration in the sunken harbor of Amathounta

CUT researchers won the awards in the category "Young Researcher 2021"