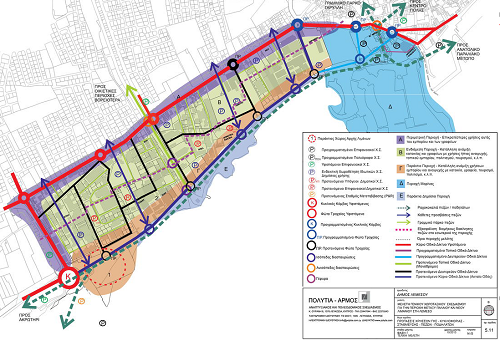 The publication of the revised Centre Area Plan, which which will change the face of the area between the marina and the port, where Limassol plans to develop its new financial center, is now imminent. As Mayor Nicos Nicolaides stated to "Entrepreneurial Limassol’’, the revision of the Limassol Center Area Plan has been completed by the Urban Planning Council and is already before the Interior Minister. The Council proposals, which largely adopt the suggestions of the local authority, will then be submitted to the Council of Ministers for final approval and the decision will be published in the Government Official Gazette, which will mark closure for this long pending issue, a development that will boost investment interest in the area.
New financial centre
Limassol Municipality has proposed the creation of a wide waterfront along the coast, to be used mainly by pedestrians and cyclists and the delineation of zones for the creation of office, residential and hotel units, in balance with the other uses. The aim is to create in the area, the new financial centre of the city. The Area Plan to be announced, is expected provide for an increase in building coefficients in order to facilitate the construction of multi-storey, office and residential buildings, but also to ensure the presence of more open spaces. There are also incentives for the reuse of listed industrial buildings that could be converted into museums, cultural and leisure sites and commercial fsacilities along Franklin Roosevelt Avenue. Aktaia Odos will be the main road of the new area that will connect the marina with the port. It is envisaged to a light traffic road, with two lanes, with sidewalks and bike paths.

CUT participated, with a physical presence, in the Thessaloniki International Fair

CUT: The "Limassol Agreement" lays the foundations for the creation of the European University of Technology