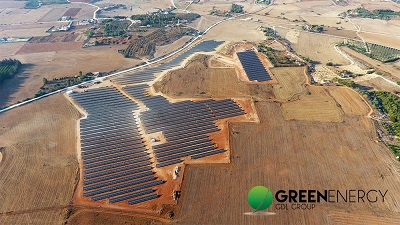 With five photovoltaic parks in operation and nine under construction, the Limassol-based GDL Green Energy Group holds a leading position in the production of photovoltaic electricity in Cyprus. Its vision, as stated to ‘’Entrepreneurial Limassol’’ by the Group CEO, George Georgiou, is the evolution of our country into a model of green energy. In 2015, the first three photovoltaic parks of GDL Green Energy with a total capacity of 7,4MW were completed, with one of them in Frenaros, being today the largest in Cyprus. The three are saving carbon dioxide emissions for Cyprus, in the tune about 8,000 tons per year.
As part of the energy market transition plan, culminating in a competitive electricity market, the Group managed to secure licenses and include projects with a total capacity of 33 MW, which represents largest percentage of this new market. The first two new generation parks of the Group have already are already operational, with a capacity of 3 megawatts, in Agios Ioannis of Malounda, while four more are under construction in the same area, with a total capacity of 13,8 megawatts. A photovoltaic park in Tseri, with a capacity of 3 megawatts and one in Skarinou, with a capacity of one megawatt, are under construction.
The construction of three more photovoltaic parks of the Group will begin by the end of the year, with a total capacity of 12 megawatts: in Nisou (4,3 megawatts), in Tseri (1,8 megawatts) and in Frenaros (6,4 megawatts). At the same time, the Group collaborates with the University of Technology, in a joint research effort for the production and exploitation of hydrogen, both for cars and for the production of energy on a broader scale. The EU, George Georgiou pointed out, considers that the development of renewable energy is a key lever to restart the economy. The cost of solar energy, he continued, is 50% lower than conventional fuels, which allows the penetration renewables in the market, meeting existing demand.
The kilowatt hours produced by the Group currently cover 7% of energy demand in the market, while the short-term goal is for this share to reach 20% in the coming years. By the end of 2021, GDL Green Energy will be actively entering the realm of electricity supply, by selling 33 megawatts of its own production, directly to commercial consumers, something that has already begun in the context of the transitional market regulation. The discount, in relation to the cost of the EAC, will range between 7-10% and the interest of consumers is said to have exceeded all expectations.

History: The Limassol hotel that made roof gardens popular in the city

A historic monastery in Limassol, surrounded by myths and legends of treasure

A fairy-tale waterfall with amazing natural beauty, in Limassol's mountains