Expansion of the sewerage system in Pyrgos and Parekklisia 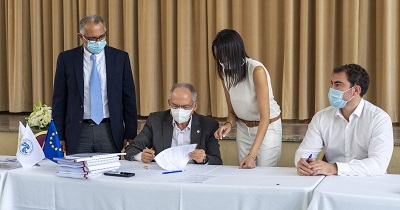 The construction of the sewerage system in two large communities of eastern Limassol will lead to the solution of serious problems faced in Pyrgos and Parekklisia. The total length of the sewage pipes that will be constructed within the communities reaches 49 km, 27km in Pyrgos and 22km in Parekklisia. Construction work is expected to begin in October and be completed in two years, that is, by October 2022. The two contracts for the major project have already been signed by the Limassol-Amathus Sewerage Council (SALA) and the contractor, Cyfield Construction Ltd.
The operation of the sewer will free these areas from septic and absorption pits, said the President of SALA and Mayor of Limassol, Nicos Nicolaides. Both the Mayor and the General Manager Giannis Tsouloftas noted that with the completion of the project in the two large communities, the sewage network of SALA is expanding substantially outside the urban areas of Limassol. The project is co-financed by the EU Cohesion Fund for the programming period 2014-2020 by 90% and by 10% from national resources. The contract, which concerns the community of Pyrgos, is for €5.880.000 and the one for Parekklisia costs €4.288.000.
Very soon, added the President of SALA, preparations will follow for the sewerage system in the Palodia community. Mr. Nicolaides also referred to the issue of flood protection works that have been planned in Limassol and noted that around the beginning of 2021 such will get under way in Agia Fyla and Ekali as well as north of Spyros Kyprianou Avenue. As for flood protection works for the city ​​centre, a contract has already been signed with the engineering consultants.

History: The Limassol hotel that made roof gardens popular in the city

A historic monastery in Limassol, surrounded by myths and legends of treasure

A fairy-tale waterfall with amazing natural beauty, in Limassol's mountains