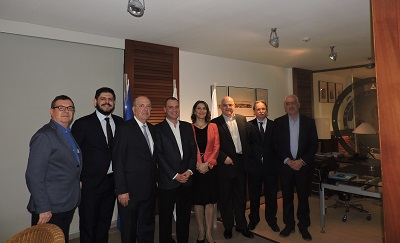 Montenegro’s Ambassador to Greece Ana Vukadinovic, who is also accredited in Cyprus, paid a visit to the Limassol Chamber of Commerce and Industry (LCCI) ad expressed her country’s keen interest in stepping up economic cooperation with Cyprus, both at state level and also at the lever of individual enterprises. The Ambassador, who was accompanied by Consul Christos Mavrellis, was welcomed in the offices of the Chamber by President Costas Galatariotis, who briefed her on the special features of Limassol, as an important center of business in a broad range of areas, such as shipping and shipmanagement, finance and other services, manufacturing industry, tourism, etc.
He also referred to major infrastructure projects in Limassol, not least of which is the under-construction casino resort. For her part, Ms Vukadinovic referred to Montenegro's economic morphology, noting that it is a country with a similar population size to Cyprus, with an economy that relies heavily on tourism but strives to develop other sectors of economic activity. Montenegro is a recipient of investments from 110 countries and has the Euro as its national currency.
The tax rate for businesses and individuals is 9% and there is notable construction activity in the country, including in areas such as the rail network, marinas, etc. The two sides resolved to keep open a channel of communication with a view to disseminating information and facilitating business cooperation. In addition to President Galatariotis, also attending the meeting on behalf the LCCI were Industry and Economy Vice Presidents Charalambos Pattihis and Liakos Theodorou respectively, as well as Board members Pavlos Paradisiotis and Demosthenes Mavrellis.
Links:
http://www.mvp.gov.me/ResourceManager/FileDownload.aspx?rId=343160&rType=2
http://www.srp.gov.me/ResourceManager/FileDownload.aspx?rid=232078&rType=2&file=SPP%20-%20Montenegro.pdf

Sea exploration in the sunken harbor of Amathounta

CUT researchers won the awards in the category "Young Researcher 2021"