Moni bridge to be ready earlier than expected 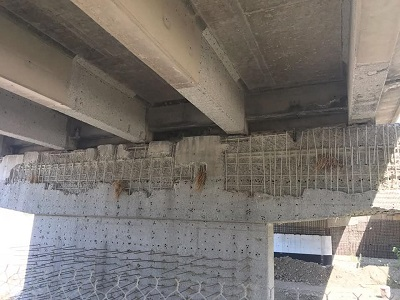 The Moni bridge project which had generated much hassle for thousands of drivers using the Nicosia-Limassol highway, is due for completion by January 30, well-informed sources told ‘’Entrepreneurial Limassol’’.  Accompanied by the Director of the Department of Public Works, Socrates Zapitis, and the Limassol District Engineer of the Department Thrasos Afamis, the new Minister of Transport, Yiannis Karousos, recently visited the construction site and inspected the work in progress both on and beneath the bridge, with a view to reinforcing the whole structure   Following consultations with a representative of the construction company in charge of the project, Yiannis Karousos pledged to speed up and complete the work at the end of January instead of at the end of February. ‘’This project’, he added, has caused a lot of trouble" to thousands of drivers, especially during rush hours.’’
The € 1.3 million project was left unfinished for years, due to the failure of the previous contractor to fulfill its contractual obligations, resulting in the Public Works Department terminating the contract, while announcing a new tender. In the meantime, drivers using the bridge had occasionally expressed concern for their safety, however, the Department of Public Works was categorical that the bridge had been inspected and there was no imminent problem that would compromise safety in any way. Work on reinforcing the damaged parts of the bridge got under way on July 22, 2019. During the work, the two lanes of the motorway headed for Limassol (about 1 km long). remain closed to traffic and special arrangements have been in force, channeling traffic to alternative lanes.

N. Saripolos: The Cypriot connecting a Limassol Square with the Athens Law School

An impressive, white rotunda next to the sea in Limassol