VASOIL - A leader in lubricating oils 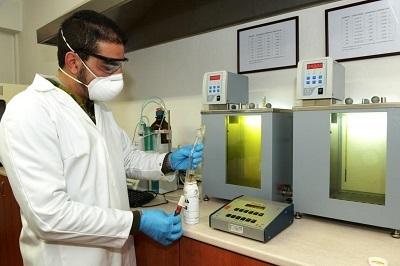 For over 35 years Vasoil Co. Ltd, has been blending lubricating oils to meet the needs of its customers. Apart from own, Vasoil brands, the company specializes in blending other brands and private label if required by its clients, and can produce lubricating oil, Marine oil, Industrial, Motor oil, Transmission, Urea and Grease. Lately the company expanded its facilities, and production capacity, to cover markets nearby markets, either under distribution services agreements or by commercial agency agreements. Vasoil is keen on providing best quality and on time delivery. It is now in possession of bigger and modernized labs with an experienced team of scientists that cater to the needs of company clients
Vasoil Co Ltd was established in 1982 with the purpose of importing lubricants and selling them in Cyprus. In 1986 Cylubs a sister company was created by Vasoil, pioneering in the production and packing of lubricants in Cyprus and started producing with the brand name Vasoil.  In 1987, a cooperation with Shell marked the production of SHELL lubricants until 1994, when Shell decides to leave the island. In 1996 Cylubs started a new cooperation with Castrol and began the production of Castrol Marine, together with the Vasoil products, covering effectively the entire Middle East (Lebanon, Syria, Egypt, Jordan) as well as selling Castrol Marine products in Cyprus until 2001, when Castrol was bought by BP and they moved their production to their own factories.
Since 2003 Vasoil Co Ltd started working out of its new facilities that are located at the industrial area of Agios Sylas, dealing in a full range of products.  In 2008 the company implemented the ISO 9001:2008 quality system, in addition to signing a letter of conformance with ATIEL, the representative body for manufacturers and marketers in the European lubricants industry; so the European specification ACEA can be used on it packaging. It has also signed a contract with Ecofuel for collecting used oil from clients in the Cyprus market as well as a contract with Green Dot for the collection of used packages. In 2011, the Vasoil Blending Plant was commissioned by Navilub Ltd, the official distribution partner of TOTAL Lubmarine in Cyprus, for the production of all the main grades of the TOTAL Lubmarine range. The blending plant is fully audited and approved by TOTAL Lubmarine. The company has for a number of consecutive years been the exclusive supplier of the Cyprus army and the government. Raw materials are always from internationally certified suppliers and such used with certified formulations for the production of lubricants.

N. Saripolos: The Cypriot connecting a Limassol Square with the Athens Law School

An impressive, white rotunda next to the sea in Limassol