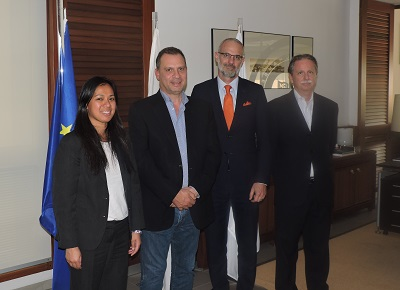 The Limassol Chamber of Commerce and Industry hosted recently a visit by Isabelle Chan, Officer as the Cyprus Desk of the US State Department.  Ms Chan, who was accompanied by the Deputy Head of the US Embassy's Department of Political and Economic Affairs in Cyprus Mark Palermo and Commercial Affairs Adviser Efi Charalambidou, met with a delegation from the Chamber Board consisting of President Costas Galatariotis, Vice President/Industry Charalambos Pattihis and Board member Chrysis Petoussis
The State Department official and her associates were extensively briefed on Limassol's economy, as well as the Chamber's areas of activity, including efforts to create a Science Technology Park and the Chamber's involvement in the European Maritec-X project which, with a budget of € 30 million and co-funded by the European Union and the Republic of Cyprus, it aspires to give a dynamic new impetus to blue growth, which is  very promising sector for our country.
The Chamber representatives also stated Limassol's readiness and expectation for US investments, in various sectors of the local economy.

How the Limassol Roadmap Changes in 2020 - Five Big Projects

Rural tourism is flourishing in Krasohoria

Moni bridge to be ready earlier than expected

VASOIL - A leader in lubricating oils

MIEEK Seminar: ‘’The World of Business and Shipping’’