The construction of the Troodos observatory has begun 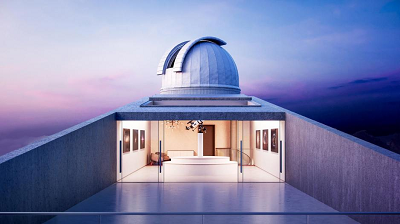 The construction of the state-of-the-art Troodos observatory in Agridia began at the end of April, after seven years of preparations. "The time has come" stated with satisfaction George Tzivas, Director of the Press Office of the Planetarium - Observatory of Cyprus, to "Entrepreneurial Limassol", adding that this year is a milestone for Astronomy in Cyprus.

The goal continued, is the work to be completed in 16 months and the observatory to operate in October 2022. The inauguration of this important project for Pitsilia by the President of the Republic, will be held on May 15 which is the World Astronomy Day. The Observatory, pointed out George Tzivas, will be interconnected with other European observatories, especially the Skinaka Observatory in Sitia, Crete, being a network of information, training and information centers for astronomical observation and space.

The observatory is part of the GEOSTARS projects of the Interreg V-A Cross-Border Cooperation Program "Greece-Cyprus" 2014-2020 and is co-financed by the European Union and national resources of Cyprus. The cost of construction and astronomical equipment amounts to € 1.4 million.

A growth cell for Pitsilia

The observatory means a lot to the wider region, said in "Entrepreneurial Limassol" the President of the Community Council of Agridia, Andreas Eugeniou, as it will increase the number of visitors and will contribute to the economic development of the region. The project is expected to attract astronomers, observers, scholars, researchers and astronomy enthusiasts from around the world, while it will be an attraction for all schools in Cyprus.

Pitsilia will benefit by attracting alternative agrotourism and astrotourism, while new jobs will be created for the observatory, host schools visits, operate a cafeteria-restaurant and a souvenir shop.