Limassol - The return of cruises 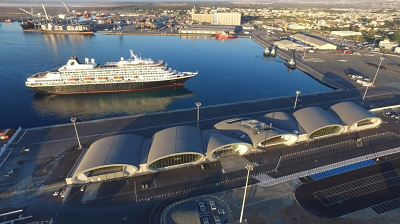 The port of Limassol has been placed on the cruises map again. Two leading cruise companies, Royal Caribbean and Celestyal Cruises, have already chosen the port as their base, while four other cruise ships have included Limassol in their visiting destinations since early July. A number that may increase, since as Deputy Minister of Shipping Vassilis Demitriades pointed out to "Entrepreneurial Limassol", two more companies are expected to include Limassol in their itineraries.

This is the first time that large cruise companies give a vote of confidence in Cyprus, said Mr. Demitriades, something that is attributed both to the benefits and facilities given to their staff, as well as to the epidemiological indicators of the country. The bet, he stressed, is to develop the port of Limassol, into an important cruise center of the Mediterranean.

Celestyal Cruises, a member of the Louis Group, announced the launch of a new weekly service from the port of Limassol with Celestyal Olympia from July 3. From Cyprus it will set sail from July 10 for the Greek islands and the Jewel of the Seas, the giant of Royal Caribbean, the largest cruise company in the world.

The fact, explained the Deputy Minister of Tourism Savvas Perdios, that Royal Caribbean will have Limassol as its base (home port) for the first time, something that was a goal for tourist Cyprus for many years, is expected to benefit its economy by around € 40 million. This decision is added to the recent announcement of the same company to include Cyprus in its program, with cruises that will start in Israel, with its latest acquisition, the Odyssey of the Seas.

At the same time, Seabourn Cruise Line, a member of the Carnival group, has included the port of Limassol with two ships in its destinations during Mediterranean cruises. The port of Limassol has been included in the itineraries that will offer, starting from Greece and Celebrity Cruises, with the newly built Celebrity Apex.

Continuous teleconferences of the relevant ministers, the bodies of Limassol (Municipality of Limassol, Limassol Chamber and Limassol Tourism board) and the CEO of DP World Limassol, Nawaf Abdulla, are continuous, for planning the reception and hospitality of the thousands of visitors who will disembark from the cruise ships, events at the port and points of interest.

The Mayor of Limassol, Nikos Nikolaides, stressed that the city's authorities will do everything possible, so that visitors have an unforgettable experience, through the hospitality and promotion of attractions, as well as events that will promote the uniqueness of Limassol and Cyprus, as a tourist destination.

At the same time, the authorities are awaiting the issuance of the health protocols prepared by the Ministries of Transport and Health and the Deputy Ministries of Shipping and Tourism and are expected to be made public within the next few days, which will clarify whether boarding cruise ships from Cyprus, a vaccination certificate or simply a negative PCR test result will be required.