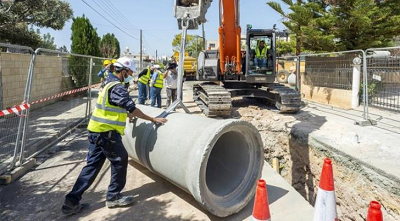 The flood defence projects are now a fact. Work on the first of the three major projects with a total budget of €35 million, which will shield Limassol from winter 2023, began in the Ekali region. Speaking in "Entrepreneurial Limassol", the Director General of the Water Board, Giannis Tsouloftas, indicated that in the summer, works will begin in Polemidia (Anagnostopoulou, Marinos Geroulanos, and Evgenios Voulgareos streets) and in the Autumn, works will begin in Germasogeia (Patras Street and Paniotis region), stressing that after many years, Limassol will finally have a complete flood protection.

The whole project will also cover the areas of Tsirio and Agia Phyla (Metanaston and Koronis, Ellis Lambetis streets). Also included are works on the streets of Panikos Harakis in Mesa Geitonia and Sfalangiotissis and Charalambou Evagorou in Agios Athanasios.

The project with a total budget of €16.2 million implemented by the IACOVOU – ZEMCO.

A tender is also expected to be launched in May for the construction of the €6 million flood protection works in the centre of Limassol, so that by the end of the year the contractor can be installed. The work is expected to take 18 months. As Mr. Tsouloftas indicated, rainwater will be diverted, collected from pipes in the avenues of Leontiou, Agia Phylaxeos, Thessalonikis, Vasili Michaelides and Agia Zonis and then channeled through the streets of Gladstonos and Navarinou to Garillis.

In 2022, the third project will begin, that is the construction of two square welds along Evagora Laniti Avenue, through which the entire river of Agia Phyla will be diverted to the Garillis river. Construction work will begin in October 2022 and will last 16 months, giving a definitive end to the problem of flooding in the Tsireio area.