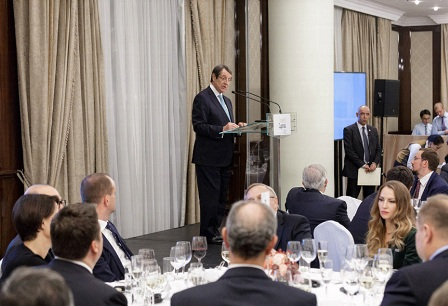 The President of the Republic H.E Nicos Anastasiades, the Minister of Foreign Affairs H.E Ioannis Kasoulides, the Minister of Finance H.E Harris Georgiades , the Ministry of Transport, Communications and Works H.E. Marios Demetriades and the government spokesman, Mr Nicos Christodoulides together with 80 distinguished businessmen, the most influence people from both countries attended an official dinner organized by the Cyprus Investment Promotion Agency (CIPA) in Moscow on 23 October 2017 in Ritz-Carlton Hotel.
Addressing the dinner, the chairman of CIPA Mr Christodoulos Anastasiades stressed that relations between Cyprus and Russia have never been stronger, both at a political and a business level. He expressed his gratitude for Russia’s continued support to Cyprus, its contribution. Referring to the signing of various agreements between Russia and Cyprus, the CIPA chairman said these aimed to boost bilateral relations, particularly as concerns innovation, science, ICT, medical services, energy, transportation and education.
The director general of CIPA Mrs. Natasa Pilides described the investment climate in Cyprus and analysed the prospects for the further deepening of relations between the two countries through the investment opportunities that present themselves. During her presentation, Mrs Pilides also briefed participants on current developments at local level which may impact Russian investments in Cyprus.
During the dinner, the Russian businessmen were able to obtain first-hand information and clarifications regarding Cyprus’ business environment. They also had the opportunity to express their opinion on important business issues to the President of the Republic and other state officials.

PHOTOS: The plan for the recast of the area between Old and New Port

The application that easily tracks down available parking spaces

Columbia – Marlow: The Unification That Changes the Shipping Industry