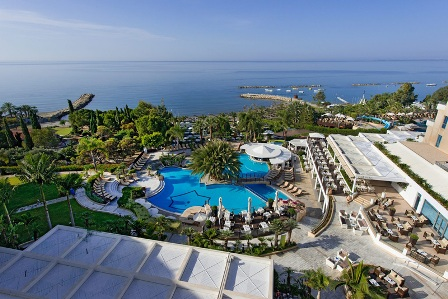 Mediterranean Beach Hotel is closing for a period of time, in order to undergo new promising renovations. The four-star hotel located on Amathus Avenue, in Agios Tychonas, will close its doors from the 25th of November 2017 until the 26th of February 2018 in order to proceed with major upgrades and renovations.
The hotel, belonging to the Stademos Hotels group, will be re-opened for its guests on February 27th, 2018 after an important makeover. The upgrading aims to emphasize decoration details, giving the hotel a brand new identity. The renovation will include a new carpet in basic areas and vital maintenance of the premises, as well as ensuring a perfect technical operation.
Along with the renovation, the construction of a residential tower next to the hotel is planned, which is expected to further enhance its value. It should also be noted that the construction company Stavros Dimosthenous Ltd, a subsidiary of Stademos Hotels Plc, sold a building under construction in Limassol in the framework of mixed tourism development on the 28th of March 2016. The building was purchased by a company of Russians for € 32.5 million.
As stated at Stademos's annual forum for 2016, the delivery of the property is expected in November 2017. It is also worth mentioning that within the framework of the mixed tourism development, a five-star hotel unit will be built which is expected to operate in 2018.

PHOTOS: The plan for the recast of the area between Old and New Port

The application that easily tracks down available parking spaces

Columbia – Marlow: The Unification That Changes the Shipping Industry