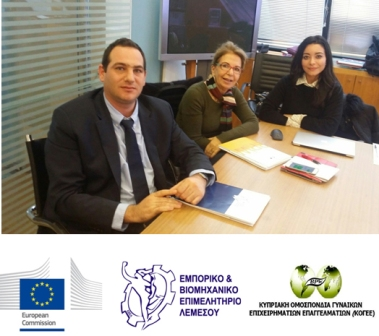 The Limassol Chamber of Commerce & Industry and the Cyprus Association of Business and Professional Women, partner in representing Cyprus in the S.E.E.W.B.A.N. (South Eastern Europe Women Business Angels Network) European programme, which is organised under the auspices of the European Commission to promote development. The programme aims at strengthening the Internal Market, Industry, Entrepreneurship as well as SMEs. The fundamental objective of S.E.E.W.B.A.N. is the encouragement of female entrepreneurship in southern European countries through the Women Business Angels (WBA) institution, which involves the promotion of investments by entrepreneurs in business ideas and small start-up ventures by women, facilitating their first steps in the market.
S.E.E.W.B.A.N. has a total budget of €628,501 and will run for two years, from January 1, 2017 until December 31, 2018. Activities to be launched in the framework of the programme include the setting up of an integrated network and a joint electronic platform under the name We–Gate, bringing together the participating countries of south-eastern Europe. Facilitating the transfer of know-how and the sharing of experiences in the WBA chapter will be two organizations, one from Scotland and one from Italy. The whole consortium comprises the following 10 organizations:
1. Federation of Enterprises of Western Greece: Greece
2. Association of Women Entrepreneurs: Greece
3. Limassol Chamber of Commerce and Industry: Cyprus
4. Association of Cypriot Women Entrepreneurs: Cyprus
5. Slovenia Chamber of Commerce: Slovenia
6. Bulgaria Chamber of Commerce: Bulgaria
7. Union of Women Entrepreneurs: Bulgaria
8. Nöi Erdek, the Hungarian Women’s Lobby: Hungary
9. Women’s Enterprise Scotland: Scotland
10. Apid Imprenditorialità Donna: Italy
The kick-off meeting of the programme took place recently in Athens, and its basic objective was to determine the next steps and launch a general coordination of activities. The Limassol Chamber was represented by Senior Officer Nicolas Iordanou, while attending on behalf of the Association of Cypriot Women Entrepreneurs were the President Mary Papadopoulou and Board members Vassiliki Savvopoulou. The kick-off meeting featured, among others, presentations by all the programme partners.
In his presentation, Mr. Iordanou outlined the important role played by the Limassol Chamber in the economic development of the city and the district of Limassol, as well as to the many upgraded services rendered by the Chamber to its members, in addition to its active involvement in the fields of research, innovation and European programmes. He highlighted Limassol’s significant contribution to the national economy and its role in the realization of projects which have either been implemented or are in the pipeline, such as the Limassol Marina, the port, the Science and Technology Park, the Casino Resort, etc. He, moreover, underlined the success of achieving the European Commission approval for the innovative S.E.E.W.B.A.N. programme, considering that the whole process was quite competitive and S.E.E.W.B.A.N. was one of only four proposals approved among a large number of proposals submitted.
Mrs. Papadopoulou made extensive reference to the multi-faceted activities of the Association of Cypriot Women Entrepreneurs including the organization of events, the initiatives undertaken in support of women’s rights and also in support of female entrepreneurship. She also cited statistical data proving the absence, or the inadequate representation of women, from decision making bodies, pointing that a lot needed to be done to improve the current situation.
The Limassol Chamber of Commerce & Industry and the Association of Cypriot Women Entrepreneurs are confident that the promotion of the right culture and the optimum exploitation of the Women Business Angels concept, will lend substantial support to female entrepreneurship. To that end, the two organizations are determined to cooperate aiming for the best possible results in line with the objectives of S.E.E.W.B.A.N.

VIDEO: Limassol Starring in 'The real return on investment'

Nikos Nikolaidis: A man full of contrasts unravels himself